HOW TO GET A BODY LIKE DAVE BAUTISTA: SHOULDERS AND TRAPS WORKOUT

Dave Bautista is the epitome of old-school muscle.

He is known for his gargantuan size from his WWE wrestling days – and it is that monolithic muscle that saw him play Drax the Destroyer in Guardians of the Galaxy, and henchman Mr Hinx in the James Bond film Spectre.

In his pomp, Bautista was 290lbs of raw muscle. When Ultimate Performance clients want to add muscle mass to their slender frames, Bautista’s name is the one that comes up against.

It’s the former wrestler-turned-Hollywood-star’s hulking shoulders that most men set out to emulate.

So to get shoulders and traps like Bautista, it’s important first to understand the muscles and how best to target them. 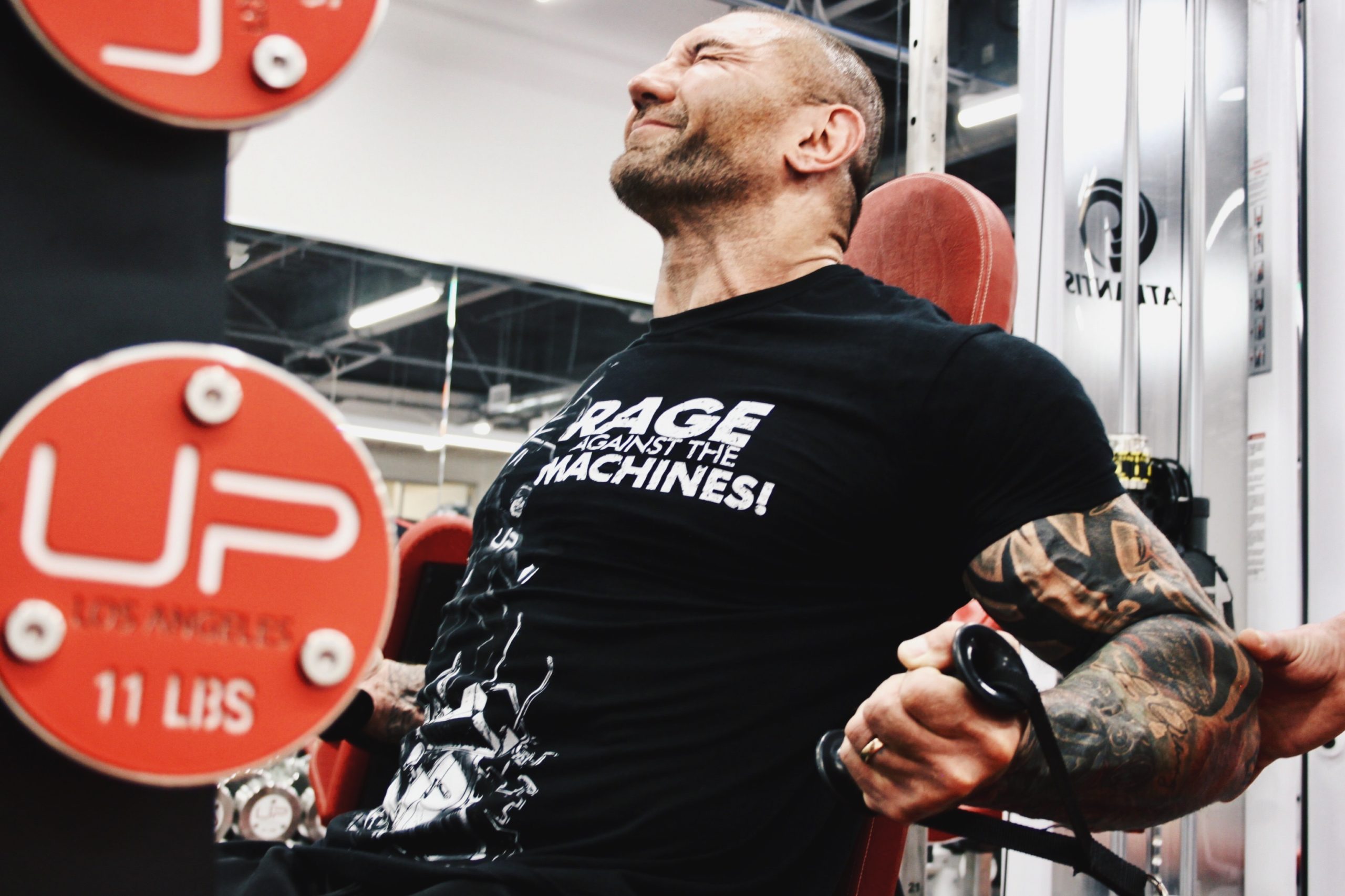 Why This Workout Works

The deltoid has three heads – Anterior, Lateral and Posterior, each with specific functions.

Here we will discuss the main actions of each head during resistance training.

In this programme, we will aim to work each head individually by intentionally isolating them through a full range of motion.

This is key in building well-balanced and developed shoulders – that ‘3D’ look that is sought after by every iron disciple.

The common misconception would be to hammer out presses on top of presses and then do an extra set of presses just for good measure.

This can be detrimental not only to your delt gains, but also emphasise imbalance and risk of injury.

The anterior delts receive a decent amount of stimulus from virtually all pressing movements (including the chest ones that many people are already doing from 16 different angles).

This means that even though direct work is needed, we are likely already accumulating a high degree of stimulus to your front delt as it is. Therefore, in this program we will be applying slightly more focus on the posterior and lateral delts, with only a single heavy compound lift directed at the anterior head.

The extra attention given to the posterior and lateral heads will likely improve shoulder joint integrity and reduce shoulder rounding forward which usually arises from excessive pushing as opposed to pulling movements. And for the cherry on the cake, good old vanilla barbell shrugs for the traps.

Weight selection: With delt training, always prioritise form and tension over trying to go as heavy as you possibly can, but keep in mind that loads should still be challenging within the given rep range. Not only will this help you manage fatigue so you can train the muscle more frequently, it will also allow you to learn how to properly isolate and activate the smaller lateral and posterior delt muscles.

The aim of this session is to apply stimulus to the rear and side delts via one ‘heavy’ movement each followed by a high-rep superset each. The workout ends with heavy presses and shrugs. With the goal of isolating and driving as much blood and stress to the smaller and often less trained posterior and lateral heads. For anterior delts and traps, a few effective heavy sets would suffice as they are both highly activated in many other compound movements. Do this workout twice a week and get stacked like Drax!

Here’s a workout to help you get a body like Dave Bautista: 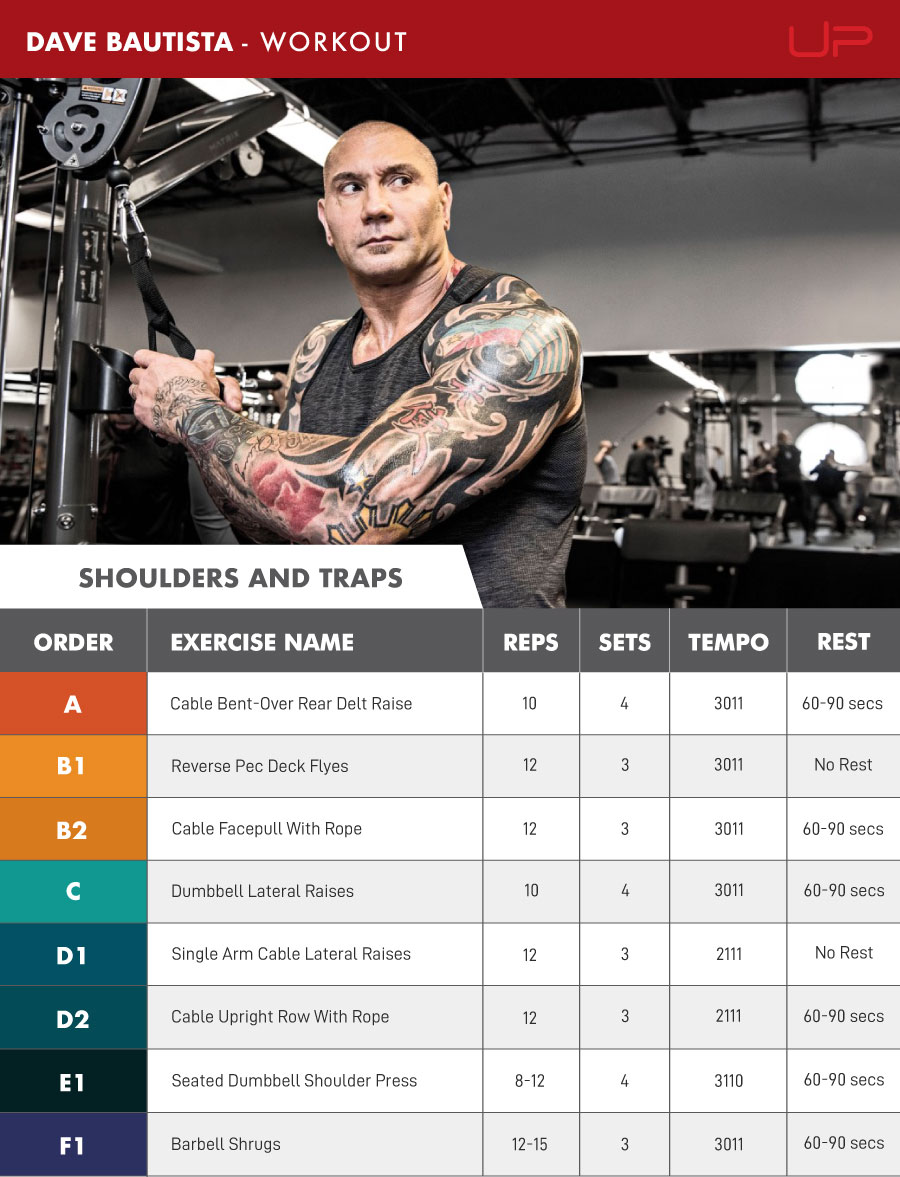 How to Perform the Exercises

This guide is aimed at trainees with a good knowledge of the exercises and how to train safely and effectively.

If you are unsure and want access to training programmes, nutrition information and over 250+ demonstration videos, sign up for LiveUP online coaching, today or consult a qualified PT.

With a bespoke personal training and nutrition programme at Ultimate Performance.

GET INCREDIBLE RESULTS ANYWHERE IN THE WORLD!

With the LiveUP Online Coaching programme from Ultimate Performance.

CHECK OUT OUR IMPRESSIVE TRACK RECORD!

Here are just some of the incredible results we have helped our clients achieve.